Case Study: How The Top 10 Game Brands do Great Marketing in Facebook

Marketing activities on Facebook not only bring fans traffic, but more than that. You have to make your fan page more helpful and interesting. Just think, fans can easily like your page but they also can easily leave your page just because they get bored.

It is important to realize, at this time fans getting smarter if no one can they get out of from page like an information or promotion than in a minutes they will hit the dislike button.

So sad but its true…

This is no exception for those of you who have a business game on Facebook, you will still required to evolve and be different to avoid boredom from the fans.

Luckly for you, in this article I will reveal what brand of the top games in Facebook did to reach their success.

How to make the fans page more interesting and unique?

Game must be fun, than you as a brand games must show it in your page. Like what these top brand did to become shinier with their interesting and unique post.

Have you ever imagined playing games on your smartphone in a strange way and unique, like the example shown below??

It’s funny way, that want to show by Candy Crush Saga, to make his fans do not feel tired in enjoying his game, Candy Crush Saga raises a pretty crazy idea with ask pet for help in resolving the difficult level.

Belive me this game have a difficult level that can be stressful to pass 🙂
At least, this unique way worth to try right?

The Lesson: Bring a fun way when post in Facebook, remember game should be fun not stressful.

There is nothing interesting on seeing the game rather than seeing different views. Let’s take a look at this picture below, Papa Pear Saga shows an interesting thing to make the game icon become different with human faces shape.

With ask to action word in its news sentences in his post, Papa Pear Saga want to show the time and energy into creating immersive, quality content to make his post become more interesting. 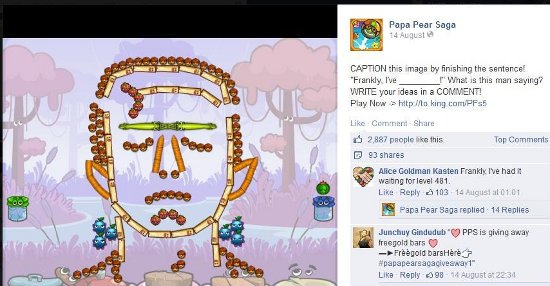 The Lesson: Discover what the things that can make you different from other, than put your energy to show it with creative way.

Criminal Case is a one brand that most often appear on Facebook, this game has the loyal players who always play it every day. This game deserves to be called a top game because when released on November 15, 2012, Criminal Case already has over ten million monthly users based on Wikipedia.

This game makes the players as a detective who solves cases by clicking an item in the scene, this is what makes his post more interesting as you can see in the example image below.

The idea is quite simple, to provide the latest information on the case to make his post Facebook fans became very curious to try to solve a new case that is going on in the Criminal Case.

The Lesson: Show the latest news in your games, to increase your fans curiosity.

Bubble Witch Saga has done a brilliant job, with a challenge to the fans, like shown in photo below. By doing this simple step is enough to make the fans remember when they play, and for fans who have not been up to the level, would be curious where the image is located so that they will continue to play it. 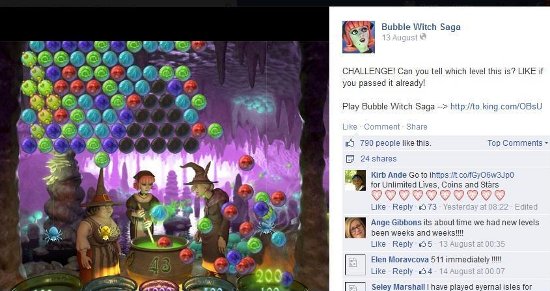 The Lesson: Reminds your fans with your game by displaying a small part of your game.

How to give your fans the special facility?

Make the fans fell appreciate is a must, don’t make them feel useless when become your fan on Facebook page. Give them special facility when they like your page. As has been done by the brand games below:

In every game I am sure you would certainly need the help of other players to complete your missions in the game. Farm Heroes Saga have the answer for fans to help them play.

As you can see in the example image below, Farm Heroes Saga utilizing his Facebook page in his post to help expand friendship fans by making the comment add me.

The Lesson: Knowing what your customer need is important, do some research to knowing what is the most your fans need in your game and let the success of the Farm heroes saga strategies as an inspiration.

Farm Ville resumed its former glory by releasing mobile games FarmVille 2, if you know previous this game can only be played through Facebook now you can play it through your smartphone. The concept offered Farm Ville 2 in my opinion is almost the same as the Hay Day Game that brings us in the countryside with farming activities.

However, the strategy adopted by the FarmVille 2 very unique and quite interesting in my opinion, as you can see in the picture below. He made ​​a pretty simple idea but very brilliant I think. By creating a race event rustic design of their work. It will make fans race and be inspired to design his village become more unique and interesting. Of course, if the fans have been inspired then they would play it at any time to create a great design as possible. 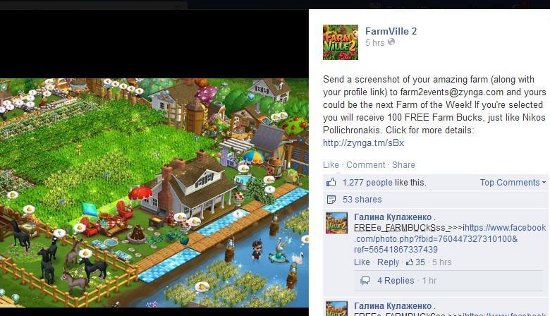 The Lesson: Utilize your Facebook page by declare an event for your fans.

In each game the players would be experiencing its own difficulties in passing a certain level. Surely it is made ​​that way so that the players become more challenged in the play, but if they still can’t get past that level they will leave the game because it was considered too difficult.

To avoid such games left, Pet Rescue Saga has anticipated it. You can see in the example image below, with specifically Pet Rescue Saga offers tips to help fans with video through a game level. If you find any difficult to past the level this very tips will absolutely helpful right? 🙂

The Lesson: Which has been shown by Pet Rescue Saga is a prime example along with an example of the proper way in the passing level and by utilizing video will make these tips very helpful.

If the fans have been very loyal to a game they like, of course, the presence of the new products that they have will be very meaningful to them. Promotion of new products which can you look, like the picture below.

Pool Live Tour Hocus Pocus Magic present his latest cue and can assist in making a stroke fands ball on the table. By using simple sentences will make fans interested to buy and try it. 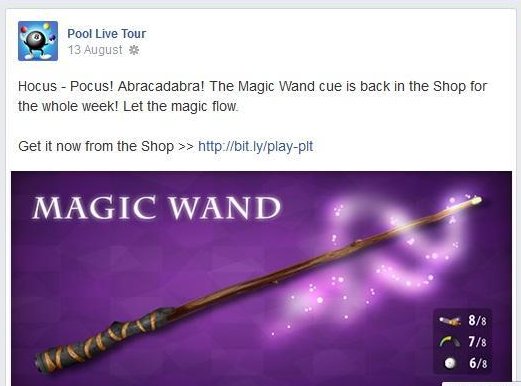 The Lesson: What makes Pool Live Tour to be successful in promoting its products is the friendly language that he use to promote its product.

How to give chance to your customer to share their opinion

For loyal players a chance to contribute personalized and involved in the game that they likes would be very difficult for them to refuse. So take this chance to make-them emotionally tied to your game. Let’s take a look what the top brands games did to give his fans chance share their opinion.

ChefVille campaign has done simple idea, he just asking themes his fans what they want to see in his favorite game. By showcasing the individuality of each stores, it gives the chance to ChefVille prove that his value the opinions of the fans and by inviting their audience to participate in an informal conversation, they bring a certain level of familiarity.

The Lesson: By creating an informal conversation with your fans it will increase their engagement to your brand.

Nothing is more fun for the fans, if they are openly invited to submit suggestions and criticism for his favorite game. The advantages for the brand will know whether is it his game to bored, is it too difficult or is it not too interesting.

What has been done by the Lost Bubble is a smart marketing, indirectly he has did online poll that can help him to develop his game in accordance with the wishes of the fans, and even fans will also like this idea because they are given the opportunity to give his personal advise to his favorite game. 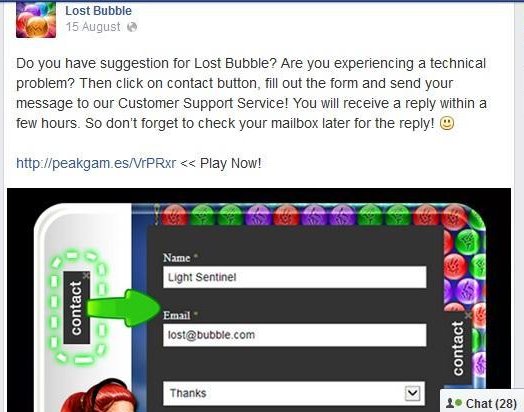 The Lesson: Make some online polling and take it with informal language that can make your fans feel appreciate.

Facebook is a costlier choice to start a business online games, with more Facebook ads installed opportunities for brand owners to make a profit game. Each older game will mutually promote the new game, which of course would be very helpful to introduce new games to the players. Facebook is the perfect medium for brand owners to start a business game.

Now that you can learn from the expert that starting a business in Facebook gaming is not too hard, but you can’t stop learning too.

What do you think? Did these steps encourage you to build a brand game audience? What other approaches and tools have you found most useful? Share your tips in the comments below, enjoy!