Top 10 Universities Do Well Marketing on Facebook (Plus The Lessons)

Do you already have a marketing brand strategy on Facebook? Various kinds of brand that is currently conducting a campaign on Facebook have a wide range strategy to reach his target market. All of this because the competitive world needs every brand to show his quality with easy way by utilizes social media.
Especially for the university brand the biggest problem is what everyone else thinks about their institution: Is it quality enough to get appropriate science for the future?

“Schools have realized that this is a very competitive market. If you want more students and get more money, you need to give more point of difference”; said Hayes Roth, VP worldwide marketing at Landor Associates.

In this article you will take a look at Top 10 University brands, that uses Facebook status update, combine visual campaign with research to create creative, inspirational, and educated post to build his brand image. Get ready, than scroll down it!

California Institute is usually known as Caltech, which is a private university located in Pasadena California, United States. Caltech maintains a strong emphasis in the natural sciences and engineering. The university is one of the leading universities with first ranks.

In the status update below, Caltech shared Supernovae that are incredibly energetic, dynamic events. This informational post in accordance with the field that is explored by the Caltech is the science of nature. 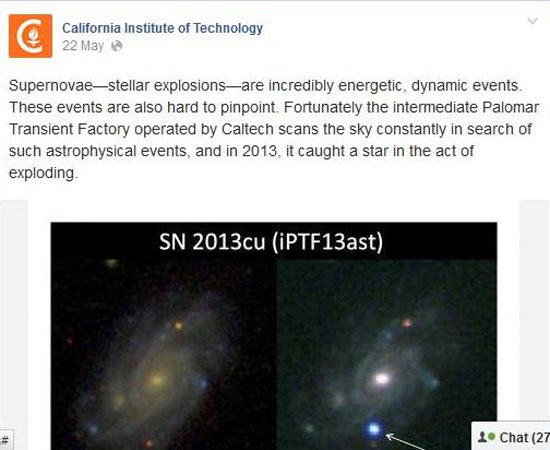 The Lesson: by share an informational post you will get win win result. Its means you already shared brand recognition to your fans, and your fans can get informational news to increase their knowledge.

This is the second oldest university in the UK, by having the most stringent requirements in the United Kingdom. Although impressed the rumors with the striking rules and procedures of the lecture, the University of Cambridge capable carrying fun situation on campus in his post below.

Like in his post below, where the University of Cambridge opens an opportunity for anyone to join in the Museum of Zoology, the museum is located in the beautiful grounds of Madingley Hall. This post shows that science can be enjoyed in the relaxed and pleasant situation. 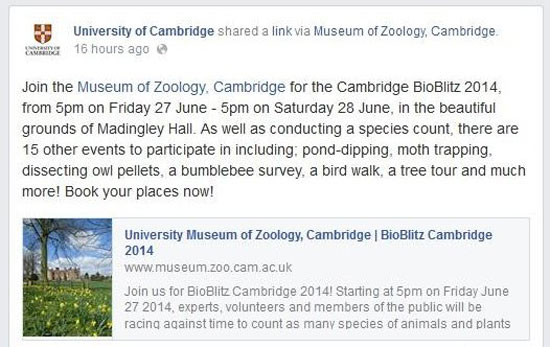 The Lesson: Promote your events campaign to open up the opportunity for all fans to know better your university.

UCLA is a university in California, collectively and individually, these university lecturers are well-known in large numbers in various fields. So it is not surprising that in this post below shows how UCLA student learn with Google glass in Theater, Film and television.

By showing this UCLA tried to show how the facility when study in UCLA. What do you think UCLA facility quite tempting right?? 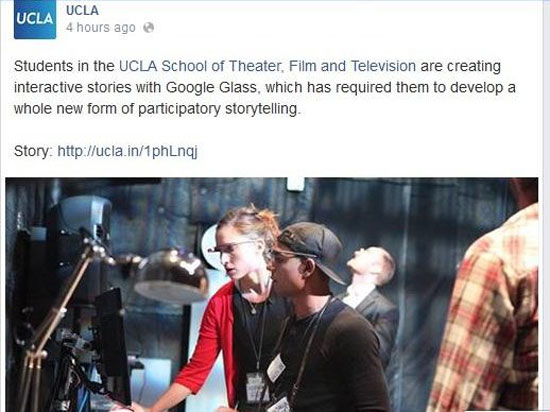 The Lesson: Show it how your student learn in your class, combine it with real picture.

Berkeley is the oldest campus of the University of California system. Berkeley is the leader of a research university, where its professors constantly being at the top in the world.

Facebook post below is result of his research that he showed in YouTube. What makes this post more interesting to see that are the calls to action campaign, like check out the video words. Berkeley does a great job by combining creating campaigns that tell how his invention works and combined with real video how this machine work. 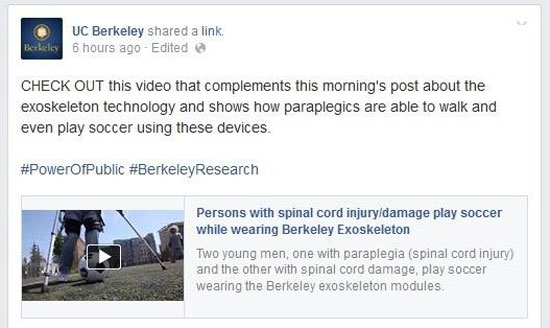 The Lesson: Light touch with sharing video to your Facebook audiences by use calls to action word.

This University was first established under the name Kings College; it is not surprising that the logo is a crown logo. The most prestigious universities in the world is by being a leader in the field of science, humanities, law, medicine, education, civil techniques, and business.

For this, University of Columbia in his post shows the results of the work of his teacher article. As you can see below, Prof. Andrew Nathan writes about Tiananmen Square Massacre and political repression. 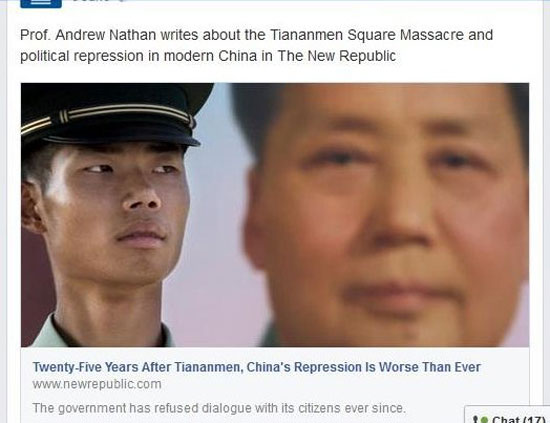 The Lesson: Columbia University’s approach is to focus on science so he generates it in his post, he does not need a lot of talk to make audience read the entire article work of professors.

This is going to Duke University shown in his campaign in Facebook, as you can see in the example image below. In particular he made the hashtag # PictureDuke, April & May 2014. A content of this photo collection is the work of volunteers who want to share in the Duke Community. 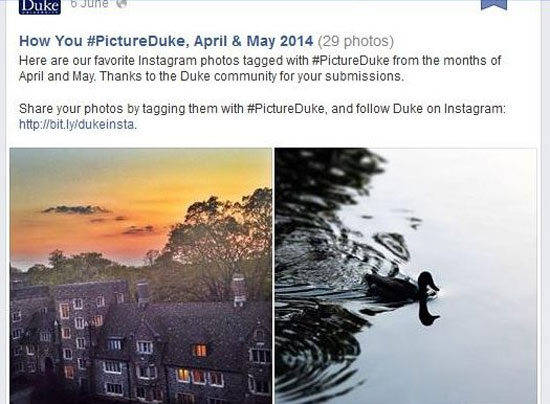 The Lesson: Open opportunity for everybody to share your campus picture to make your Facebook page more interesting.

The Lesson: This proved to be good tactic if you appreciate your scholar by promote it in your timeline than it will encouraged viral sharing.

This university have specialist in science, engineering, medicine, and business. Imperial is a major centre for biomedical research and founding of the Francis Crick Institute and Imperial College Healthcare, an academic health science centre.

His attention to biomedical research as well he implemented to her post on Facebook. He made some live debate with Prof. James Moore in Twitter about full scale production in biomedical engineering lab. This debate is quite unique in my opinion due to be made live within a certain time on twitter and he is promoting it on Facebook.

The Lesson: Promote your live debate in your every social media accounts.

The institution pioneered the concept of the modern research university in the United States and has ranked among the top worlds throughout its history. The university is also number # 1 in science, medical, and engineering.

Johns Hopkins uses his Facebook page to make some justification post news about hoaxes. This is very important because of rumors spread of cancer is closely related to and on behalf of the Johns Hopkins hospital.

The Lesson: Post some justification news about hoax and failure news

Demographics also show that he students from various ethnic groups around the world, this is what MIT want highlight by show it on his Facebook page. Congratulations post to the graduated who meets his hall is a form of tribute to his scholar.

The Lesson: This post did two things. First, it showed appreciation for his scholar and second, to promoted the university graduation with an attractive image without a blatant sales pitch.

As you can see, by using Facebook as their marketing efforts. Top universites above gain the interests of audiences and connects with them on a personal level. Like educational status, the fans status or daily news updates with creative and interesting ways.

How do you think? Do you have another great opinion or idea to share with us? Let’s talk in the comment below.