When company decided to enter a new market of course expect getting the right investment and can provide benefits that can help the company to stay afloat. But the campaign could mistakenly, this can make the brand gets doom for survival, that’s what I call a marketing campaign disaster.

Several famous companies despite already become expert in marketing their products still make mistakes, that become a marketing disaster for its brand, as I have expressed in my previous article – 3 Branding Lessons from The Greatest Marketing Disasters. Here are the next 3 lessons that you can learn from famous brand marketing disasters:

Understanding the meaning of the writing style and a symbol of the country your market destination is very important, if you make a mistake this can have consequences like these brand below.

Example 1: Coke
There are times when a brand does not give the words in the ad, the simply image that can be easily understood by the consumer, such as Coke’s ad images below, Actually there is nothing wrong in this advertisement right? Of course you can also understand the meaning in the picture below right? the meaning of the picture is someone lying in the desert after drinking coke he can be fresh and running. A problem arises when the ad is doing in Arabians Middle East, but why?? Which is not understood by the coke company is in the style of writing in Arabic reads from right to left so they read it in reverse!!!

Needless to say this campaign is failure.

Example 2: Gerber
Several years ago Gerber as the baby food company expanded marketing activities to Africa, at that time the majority of African people still cannot read, Gerber gave baby face symbol in their packaging same like in the United States and other countries around the world.

What makes the problem is one, African community after see the baby’s face on the packaging, they become hysterical thought that the contents of the boxes are babies. As a result, their products did not sell until they changed the packaging design.

Lesson that you can learn: when you Decided to go international campaign you must understand the style of writing and the meaning of certain symbols in your destination country.

2. Do not make the offending ad

Advertising is a place to conveying a message for consumers, aims and purpose in marketing a product, if you make an ad that offends can occur as the brand below.

Example 1: Hyundai
Hyundai theme marketing campaign several years ago tells about a man trial suicide. Here are the story: “A man, for best could be better known to him, Decides to commit suicide. He figures out that the Easiest way to do so would be by gassing himself to death. So he sits in his car, having redirected the noxious fumes of the exhaust, into the car. He’s rolled up the windows and taped the edges so that no gases leak. Then he starts the engine; the fumes come in and he awaits the death that he desired. He waits and waits. But, he does not die. Because he’s in no ordinary car, he’s in a Hyundai ix35”.

Actually meant by Hyundai is with riding his car you can survive despite being injured either accidentally or intentionally. But this is precisely the hyundai ad evokes bitter memories of one viewer who saw the father has committed suicide along with her sister, the viewer named Holly sent a letter to Hyundai, here are the contents of her letter:
“When your ad started to play, and I saw the beautifully-shot scenes of taped-up car windows with exhaust feeding in, I began to shake. I shook so hard that I had to put down my drink before I spilled it. And then I started to cry. I remembered looking out of the window to see the police and ambulance, wondering what was happening. I remember mum sitting me down to explain that daddy had gone to sleep and would not be waking up, and no, he would not be Able to take me to my friend’s birthday party next week. No, he could not come back from heaven just for that day, but he would like to if he could. I remember finding out that he had died holding my sister’s soft toy rabbit in his lap.
Surprisingly, when I reached the conclusion of your video, where we see that the man has in fact not died thanks to Hyundai’s clean emissions, I did not stop crying. Suddenly I did not feel that my tears were justified by amusing your message. I just felt empty. And sick. And I wanted my dad.
My dad never drove a Hyundai. Thanks to you, neither will I”.

Days later, Hyundai came out with an open apology for all the customers:
“Hyundai Motor deeply and sincerely apologizes for the offensive viral ad. The ad was created by an affiliate advertising agency, Innocean Europe, without Hyundai’s request or approval. It runs counter to our values ​​as a company and as members of the community. We are very sorry for any offense or distress the video by the caused. More to the point, Hyundai apologizes to those who have been personally impacted by the tragedy” The company said.

Example 2: Huggies (dady test)
Huggies this time made ​​the realty show which shows how if the father is left alone with her ​​baby without a mommy help him, the gathering of the father to take care of their babies and showed that a father figure is as deficient and indifferent caregivers.

This ad had a wide range of protests from different communities, due to the existence of this ad illustrates that the affection became father to son was not sincere and the ad should teach that dads as loving and careful when take care their children.

Example 3: Oreo
Twitter media is good media who suitable to make campaign by relying hashtag will capture opinions directly from the consumer.

Oreo was no lag in doing campaign by using the hashtag. With the theme hashtag called #slicksnaker ask the opinion of the consumer “Ever bring your own Oreo cookies to the movie theater?”, As we know that there are rules not to bring their own food into the movie theater, of course it was immediately received strong protests from AMC theaters as we can see in the example image showing retweets from AMC theaters for the following hashtag Oreo.

Lesson that you can learn: message that you convey to the consumer should be careful, doing research on the social impacts that can be caused, so you can avoid the fatal error in conducting campaign.

Controversy always able to attract the attention of the public, but controversial ad can result bad things happen such as the following ad.

Example 1: Cartoon network Boston bomb
In 2007 when the Cartoon Network Launched a guerilla marketing campaign in roomates they set up LED signs in various places throughout cities of the to promote one of their cartoons. Regrettable in this cartoon make a resident in Boston, however, thought the devices were bombs and called the police. This turned into a terrorism scare, resulting in the shut-down of many public transportation lines, bridges, and roads.As we can see in the picture below where workers clean the LED lights belong to cartoon network. In this instance the problem cost the head of the Cartoon Network his job, and the broadcasting company $ 2 million in compensation for the emergency response team. 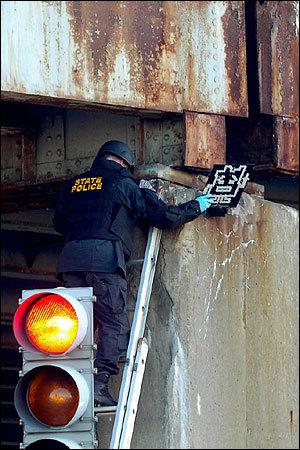 Example 2: Hitler store
This lesson comes to India the name of the men’s clothing store, as you know the name of Hitler is the name of the Nazi dictator who led Germany in the world war, despite the dictator’s already dead but his name became a symbol of dictatorship and war atrocities.

As a result of giving this name was a protest from Israel and the clothing store’s owners has come under fire in recent days for naming the store after the notorious mass murderer, with a swastika inside the dot of the “i.” The owners have explain they didn’t intend to name the store after Adolf Hitler, but rather after the co-owner Manish Chandani’s grandfather, who earned the “Hitler” nickname for his strict demeanor. The image below is a storefront called Hitler.

Lesson that you can learn: Avoid doing the theme of your marketing campaign or give your brand naming conflicts that can give bad impact to your company, be careful when doing campaign.

Being a well-known brand is not enough to introduce your product, the necessary prudence in the conduct campaign. The third lesson from the above I take the example of a famous brand that basically they do not accidentally commit a small mistake can result in very large impact for their brand. By learning from the experiences I expect you not do same mistake as they did.

I hope you find this post is useful, do you have another story to share? Please comments below.