Go international is a dream of every brands, can grow the business to be better known by consumers outside the area is the toughest challenge, the differences that must first be learned is the key to the success of your brand. It takes a mature marketing to remain acceptable with the foreign community. Because if you make the mistake of using bad or in genius marketing plan this can be bad for your business continuity. Could be a loss you will get even the most extreme could happen is a boycott for your brand.

Here are the lessons that in genius marketing plans who gives a variety of real examples of marketing problems from big brands:

#1. Make sure you understand the language

This time the issue arose in China, at that time Pepsi made ​​a slogan “Pepsi brings you back to life”. Actually, this slogan is not wrong, but the differences in language make this an issue. The mistaken by Pepsi is that the phrase translated to “Pepsi brings your ancestors back from the grave”. Let’s see the picture Pepsi ad with the slogan below.

What do you think, in fact for the citizens of China if look between slogans and images belong to Pepsi ad is not wrong to make them think the message Pepsi became “Pepsi brings your ancestors back from the grave”. Right?

This wrong message certainly can be fatal, for the citizens of China who very respectful of their ancestors certainly were conveyed from the Pepsi slogan could be considered an insult to their ancestors.

Lesson that you can learn: In ads for international people, make sure you have contact translators and local cultural experts before launching your ad.

#2. Avoid the impression of sexual crimes

In here I will give you 2 examples by famous companies that perform failure offensive campaign ads with sexual crimes, and here they are:

Example 1: Fiat
1992 Fiat cars in promoting new product in Spain, the theme in the promotion of its newest product is “Love letter for woman in Spain”. This ad is a veiled advertisement done by fiat; some think this ad is actually quite unique because there is no proceeding makes campaign by writing letters to all women in the country before.

The workings of this love letter is by sent out 50,000 Fiat of such letters to Spanish women, both single and every woman who are married will receive this letter. The problem is that these women do not know that these letters are from Fiat in order to promote a new car, eventually arise fights for women’s with her paired and arise feeling paranoid for women who are still single. Here is one example of love letter belongs to Fiat. 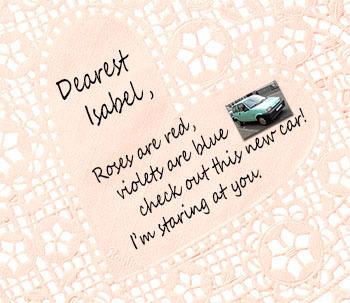 Example 2: Calvien Klein
Maybe Calvien Klein not be aware of his ads that can be made ​​worse in the 1990s, this ad shows a kind of audition for a new model using Calvien Klein jeans, which is unfortunate in these ads is that they use a child under the age and be heard clearly that the audition committee is commenting on their body parts. The FBI had to investigate to the make sure nothing illegal had happened during the making of these commercials, and Klein was forced to pull the ads and issue an apology to America. The following is a video YouTube of Calvien Klein ad are banned.

Lesson that you can learn: Avoid a campaign related to sexual crimes, as it pertains to women or children, this can be very detrimental to your campaign. Consult your ads with your lawyer before launching.

Example 1: Pepsi Philipina
This marketing disaster is Owned by Pepsi in Philiphina with in genius marketing plan as “the number fever”, the plan was simple: the underside of the bottle caps of some of their bestselling drinks – Pepsi, Mountain Dew and 7 Up – would have a 3 – digit number and a cash prize amount ranging from 1000 pesos to 1 million pesos imprinted on them. Pepsi’s sales shot up nearly 40 percent over the next couple of weeks. Impressed with the initial success, the Pepsi folks even increased the number of prizes to 1500 and made ​​sure the campaign reached to customers all across the country. By the time it was over, an estimated 31 million people had participated in it which was more than half of Philippines’ population at that time. (www.cracked.com)

Actualy this marketing plan is quite a success, but after they announced the winner of protest that could arise I say bad enough, but why? Until there is a protest that hard, apparently after Pepsi Announced the number “349” as the winner and that whoever had the winning cap would take home the promised sum of one million pesos. But they missed a key point here. According to their original plans, they were not supposed to consider certain numbers and “349” was one of them. Why? Because they had printed as many as 800,000 caps with the number “349” alone! And this is what happened after Pepsi announced a winner you can see in the picture below.

Pepsi eventually apologized for his mistake, his tried their best covering up, saying the caps did not contain a proper security codes and all that. They also told them that a computer glitch picked the number by mistake. All of this is a mistake is because DGConsultores consultant, a Mexican consulting firm that Pepsi had hired to randomly preselect the winning numbers and give a list of the 60 winning combination with their corresponding security codes. Clearly Pepsi had had instructed them not to Consider certain numbers and number “349” was of course one of them. The consultants somehow missed the memo, and well… that spelled doom for their client and its top management.

Example 2: Walkers Potato Chips
Disaster contest conducted by Walkers potato chips this time named Walkers potato chips contest, this is a contest that asks visitors to If the customer bought a bag of chips for 40 pence (about 65 cents), they could go onto the website and try to predict when and where it would rain. If the customer could accurately predicted time and place, they’d win 10 pounds (about $ 16). Yes, this contest was held in England when autumn. A time and place where the weather comes in two flavors: torrential downpour and “Oh, is it raining? I could not hear over the sound of slicing my wrists.” Statistically, you have a better than 1 in 3 chance of it raining on any particular day. Also, Walkers gave out two entries per bag, doubling each participant’s chances. In the end the weather occurs with relatively high rainfall, walkers should be prepared over 1 million, unfortunately without any clear explanation quite suddenly the contest website went down, the promotion also suddenly disappeared after that. As you can see below this is the website down. 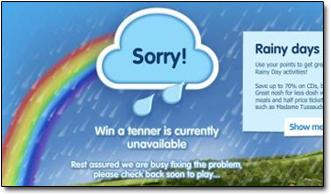 Example 3: KFC
In 2009 KFC perform an unusual marketing plan, even KFC in his campaign this time working together with Oprah Winfrey in the Oprah Show to invite viewer download a coupon for a free 2-piece chicken meal with two individual sides and a biscuit. The only problem is they were not at all prepared to honor the deal.

When 4 million people showed up to collect, KFC’s across America fell apart. There were mini-riots, service refusals and most importantly, not enough chicken. Even Oprah had to pull the coupon from her website! KFC was looking awfully stupid. In the end, 10.5 million coupons were downloaded after all, and America Consumed $ 42 million worth of free food. Without getting it to the people smoothly and on the first try, Essentially KFC gave away a bunch of food without getting any positive press out of it. A campaign which I think is pretty useless without any result due to the fact that even his business suffered massive losses. The following is a picture of the product with a coupon offer from KFC

Lesson that you can learn: Calculation needs to be applied in a promotional offer that gives discounts and even free products to consumers, because extreme events can happen if you do wrong, you may also be experiencing a loss like brand above.

Marketing activities required a very careful plan, you can’t just plan a campaign with ordinary way, but you should consider a variety of aspects, ranging from legality, economic, even socio-cultural impact after you make campaign ads for your brand. You should consider having some people who are experts in their field to help you to avoid mistakes.

What do you think about the 3 lessons above? Is it quite useful for you? Do you have any experience? Please share with us in the comment below.