What do you think about Mc Donalds company? Is it a good or bad company? Along with the news that you often hear, of course Mc Donalds has some pretty serious crisis afflict the company, start of the crisis surrounding community and the economic crisis that happen in the country. Previously I have written the Part I of Mc Donald’s Strategies to Face of Crisis, and today I’ll continue to share the other Mc Donald’s strategies to face of crisis that tested the strength of the company to maintain its brand image in front of their consumers.

Here are 5 lessons that you can learn from Mc Donalds when faced with the crisis that hit their brand image:

Today’s society has been deeply understand the importance of health and more concerned about obesity. With increasingly public awareness about the health directly impact on restaurants that serving fast food. As you know, fast food is contain lots of calories that would be classified as “unhealty food”.

The crisis:
With the allegations as unhealty food Mc Donalds “forced” by the people to change the menu option in Mc Donalds restaurant to be more healthy. As I have said in the first series: to PROVE his words, Mc Donalds has presented the nutritional information for its menu. The menu was given Provided healthy menu option in the form of fruit smoothies, salads and putting apples in its “Happy Meals”, and even introduce egg white are becoming a popular choice of breakfast menu, than a problem arise when Mc Donalds decided to supplement a healthy diet in the “Happy Meals”. But sales still drop when Mc Donalds introduces oatmeal and smoothies menu, because the people still consider when going to Mc Donalds will get a burger and fries, the public actually can understand what they need. The fries and beef burger is a menu of identity inherent in Mc Donalds.

The strategies:
The demands of the people still want a healthy menu options make Mc Donalds choosing a healthy diet that match with Mc Donalds product identity, that healthy menu is Egg McMuffin breakfast sandwich, which displays a menu with look like a burger but not with beef but filled with white egg. With the addition of this menu makes Mc Donalds does not lose its identity. Here is the view Mc. Egg that is a favorite product.

Lesson learned: Provide the people option menus that accordance with their wishes but do not lose your original identity.

Do you ever see Mc Donalds big mac with titled “You’re not alone”? If not, here is a video that shows a poster advertising the Big Mac that is posted in subway.

The crisis:
Ads shown by Mc Donalds considered to be mocking people who sought crisis counseling. Obviously this ad is very offensive presence the people who saw it on the subway.

The strategy:
Based on article http://investorplace.com/2013/04/mcdonalds-apologizes-for-big-mac-crisis-ad/ after consumers found the ad offensive, Mc Donalds has released a statement saying that the ad did not receive corporate approval prior to its placement in the Boston subway system. The company said it has requested its removal and apologized to anyone offended by the ad.

Lesson learned: In issuing an ad you should cooperate with the party that can be trusted, and to restrict any party that no responsible issuing your ad.

Mc Donalds had been using Ronald Mc Donalds as a mascot. As we have seen before Mc Donalds getting accusation for a restaurant that provides junk food, so indirectly by looking mascot a clown with a floppy red shoes and flaming hair consumers will immediately remember the junk food that is sold by Mc Donalds.

The crisis:
Mascot which has been the identity of Mc Donalds getting into trouble because a group called Corporate Accountability International plans ask Ronald to retire at the company’s. Based on this article: The group, which campaigned against the Joe Camel cigarette mascot in the ’90s and complained about Ronald as a role model at Mc Donald’s annual meeting last year, has stepped up its campaign. The group has taken out full-page ads Wednesday in the Chicago Sun-Times, New York Metro and four other papers to call for his head. The ads, signed by more than 550 health groups and professionals, carry the headline, “Doctors’ Orders: Stop Marketing Junk Food To Kids. The current crisis is really not unexpected, because the mascot of the identity of Mc Donalds forced to be replaced, of course this will greatly affect the brand image has been built by Mc Donalds for years.

The strategy:
Mc Donalds explain Ronalds has never retiring or even downplaying considered their smiling mascot. To eliminate the impression Junk food when seeing ronalds clown based on this article: Around 2004, Mc Donald’s Christened Ronald as a “balanced, active lifestyles ambassador”, and stuck him in commercials where he trained for the Olympics. He got workout clothes. He got a tuxedo. He moved from Mc Donalds Land into the real world. New commercials show him as an active, athletic clown who plays soccer, shoots hoops and encourages kids to visit Mc Donald’s Happymeal.com website. There’s barely a mention of burgers and fries, and also Through the years, Ronald has also been the face of Ronald Mc Donald House Charities, which provides free or inexpensive housing for families who must travel to get medical treatment for a child. He still shows up as often as ever at camps for sick children and charity events. Here is example picture when ronald Mc Donalds do charity.

Lesson learned: mascot is a brand identity that cannot easily be replaced just like that, when exposed to negative accusations against your mascot then show that your mascot can be better than before, it aims to eliminate the negative impression of your mascot.

Media twitter is a tool that can allow each brand to achieve success, it is not surprising that Mc Donalds also do it to drive people to its new commercials highlighting some of the real-life farmers and ranchers who supply Mc Donalds with its ingredients.

The crisis:
All the plans that have been prepared by Mc Donalds on twitter running smoothly. Based on this article: After clicking on the hashtag #MeetTheFarmers, people were watching the videos online, and Rick Wion, the 39-year-old director of social media for Mc Donald’s U.S.A., was pleased. “We got lots of great engagement on that, lots of uptick from it, lots of video views” he says. But that afternoon, when Wion moved the conversation to #McDStories, to encourage people to keep talking about the farmers, the promotion quickly began to go sideways. Hashtag #McDstories the plans that have been prepared by Mc Donalds on twitter to promote their ads running smoothly, other kinds of stories made their way into the Twitter feed, horror stories, real or imagined, justified or not, about the restaurant’s food, service, atmosphere, everything. In a matter of minutes, a public relations success had become another public relations crisis for the company. In one hour Wion decided to withdraw from the account twitter hashtag Mc Donalds. 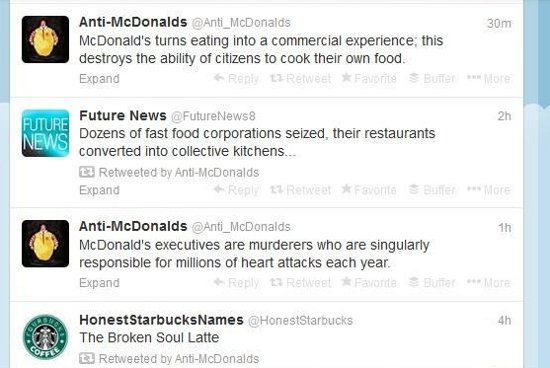 The strategy:
In the face of attacks anti Mc Donalds Twitter, Mc Donalds take the fight back to prove that they accused over the years is wrong. By doing quietly launching a major Counteroffensive of its own. And it isn’t simply trying to keep its current customers happy; it’s also hoping to convince Mc Donald’s skeptics that they’re wrong. Based on this article: In 2011, the average free-standing Mc Donald’s restaurant in the United States generated nearly $2.6 million in sales, an increase of roughly 13 percent since 2008. Last year, sales nearly doubled the industry’s projected growth rate by growing 4.8 percent over the previous year.

Lesson learned: in the face of attacks in social media, you should avoid and not fight back because it would result in a prolonged war. Did fight back with direct evidence that they allege is wrong.

Mc Donalds had frenchise restaurants are scattered in various countries, especially in China. China is Mc Donald’s third-biggest market, with over 1,400 stores throughout the country.

The crisis:
The problem then arises when one frenchise existing in China sell chicken that has expired. This chicken is served that has cooked 90 minutes in which the chicken should be served to the consumer have time limits set a 30-minute. Based on this article said that employees at a Carrefour store in the central city of Zhengzhou changed expiration dates on some chicken and sold regular chickens as more expensive free-range birds. Here is a picture when China officers are conducting an investigation to Mc Donalds:

The strategy:
Food safety is very significant important for China, with this case is certainly very difficult Mc Donalds. To correct an error that has been made, Mc Donalds post apologies and did it where their customers hang out. Based on this article: In the first 14 hours** that passed after Mc Donalds posted their apology it has generated 7433 comments and it has been forwarded 14611 times. In the same time Carrefour’s statement have received 1352 comments and it’s been shared 2930 times.  At the time of writing the number of responses from the companies amount to – zero, nil, none.

Lesson learned: Be careful with your employee attitude, provide adequate training to nurture them to mature while maintaining the quality of the product that you have set.

Mc Donalds as the top brands are never out of a prolonged period of crisis, ranging from a crisis of confidence, until the economic crisis that is able to shake the stability of the company. But behind all the crisis ever experienced by Mc Donalds, they was always able to cope and survive to become better at through the crisis. From this article find out what strategy you can learn to apply on your brand. So there you have it! 5 experience strategies from Mc Donalds when facing a big crisis that happens to him.

Do you have any experience when faced with a crisis? What other strategies that you can share? Let us know your thoughts in the comments below.

Simple & Professional Resume Templates to Get a Dream Job

Infographic: What are The Trends of Social Media Marketing in 2014