Why Companies Mark Up Their Products (Infographic)

If you’ve ever bought popcorn from a movie theater, you’ve probably wondered why it’s so expensive. These days, the going rate for a medium-sized popcorn is nearly eight dollars, but you can get the same popcorn at the grocery store for a fraction of that price. So why is movie popcorn so expensive, and why do people keep buying it?

Coupon Chief answers these questions with an infographic on price markups, pricing strategies companies use to make a profit on their products. From diamonds to printer ink, take a look at these popular products that have some surprising markups.

Price Markups: What Are They?

In the retail industry, a price markup is the selling price of a product compared to the cost of manufacturing that product, expressed as a percentage. The formula for calculating the markup percentage is as follows:

Consider the movie popcorn example:
Movie popcorn costs $0.99 per medium container for theaters to make on average, but theaters sell it for $7.99 per serving. Using the above formula, the markup can be found as follows:

Why Do Companies Use Markups?

Typically, companies use price markups to profit on the products they sell. If a brand sold its products for the same amount of money it took to produce it, the business would never break even.

In addition to making a profit on inventory, many companies use the money earned from price markups to fund other business operations like marketing campaigns, research of new products, and fulfilling salary and benefit perks for employees.

Products of all kinds have price markups: from your smartphone to beautiful engagement engagement rings. The following items have some of the most surprising markups on the market.

A common product in most homes, printer ink has actually been named one of the most expensive liquids in the world. However, it isn’t pricey because it’s extremely valuable or rare –– it just has a retail markup that raises eyebrows.

HP 27 black printer ink can be purchased from major retailers like Best Buy for $22.00. However, the same type of ink can be purchased from an independent retailer through Amazon for a mere $5.50 per package. This incredible price increase means that Best Buy and retailers like it have implemented a 75% markup on what is otherwise a very normal product.

With over 100 million iPhone users in the United States alone, it’s safe to say that Apple phones are a hot ticket item. While smartphone technology is getting more impressive every year, iPhones are actually pretty inexpensive to make. In fact, the iPhone 11 Pro Max allegedly costs Apple a shockingly-low $490.50 to manufacture.

For those who have purchased the 11 Pro Max, the retail price of over $1,099.00 might seem outrageous, knowing the cost of manufacturing –– it’s nearly double! However, Apple has gotten away with far greater markups in the past.

According to the graph above, Apple’s largest markup ever implemented occurred in the iPhone 3G, the second iPhone model released to the public in 2008.

Looking back in time, not much changed from the original iPhone and its immediate successor, the 3G model. So what fueled this outrageous 260% markup?

The huge spike in markups likely occurred for two reasons:

Everyone knows diamonds are pricey –– prospective grooms must save for months to pay for an engagement ring, and even the simplest of bands can set you back thousands of dollars.

Creating a diamond is not a complicated or expensive process, however. In fact, an average loose diamond could cost as little as $146.00 to create for diamond companies. 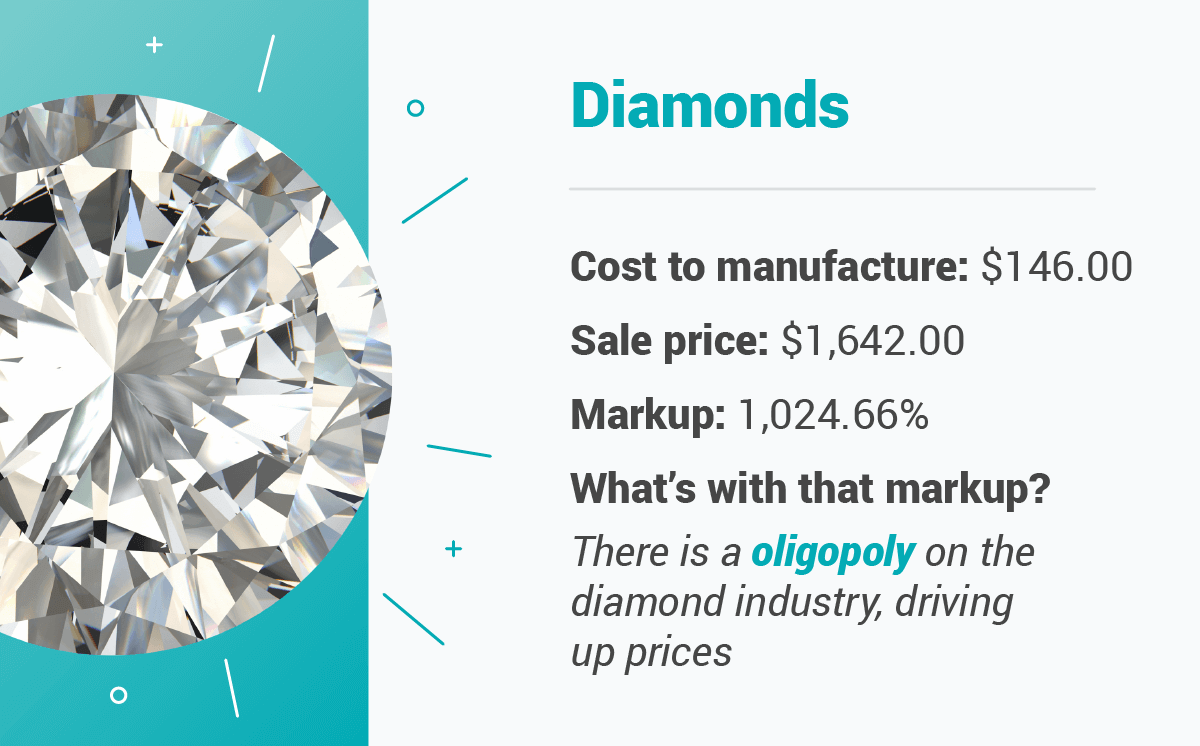 While it’s a common misconception that diamonds are rare, precious gems, the reality is that they’re more common than emeralds, sapphires, rubies, and many other gemstones. So why are they considerably more expensive (a 1.00 carat diamond averages $7,000 at retail compared to a mere $100–$1,000 per 1.00 carat for another gemstone)?

A small number of companies control the majority of diamond sources across the globe. These companies are industry leaders and because of their control, they can set prices as high as they like with few repercussions.

Below are average price markups across major industries, based on production pricing data available to the public:

The Bottom Line: Know What You’re Buying Before You Pay

Remember, many of these markups are used to fund business operations for your favorite companies: Apple uses its profits to fund the research and development for new products!

These markups might have your head spinning, but it’s important to remember that as large as the markup might be, there are plenty of ways to save money on these products.

Why And How Students Should Create Their Own Freebie