Pinterest is a new social media site that is gaining popularity today, but like any new social media site, you always have the question: “How does it work?”
For you that doesn’t know about Pinterest, the simple is Pinterest is a pinboard-styled social photo sharing website. “Pinterest is a place to organize and share online images that you find interesting or inspiring. Once uploaded or shared on Pinterest, these images become known as Pins, which the user can place on customized, themed Boards. You can create Boards for any topic imaginable, from cats to classic cars to cats driving classic cars. The possibilities are endless.” As Mashable said on Pinterest Beginners Guide.

In this post, we’ll take a look 16 very interesting Pinterest Infographics that will show you, What is? How to use? The power of pinterest, Should your business use it? The marketer guide, interesting fact and more.

By Infographic Labs
Pinterest is a site where the community can collect their favorite sites or pages online and showcase them in a very unique way.

by MDGadvertising
This infographic explains some Pinterest basics, such as explaining what a Pin, Repin and Board are, and provides five tips. You should first decide whether Pinterest is a fit for your product. Selling life insurance? This might not be a helpful platform for you. If you think Pinterest is right for your brand, go ahead and add a “Pin It” button to your site. Make sure to use great visuals. Pin products you love but don’t sell — this site isn’t all about self-promotion. Add some early Pinterest all-stars and learn from their strategies.

Design by Javier Muñiz
It is one of those data packed infographics that we all love to check out, and this one is by all means a mammoth when it comes to data. I have no doubt that Pinterest will surpass at least Google+, and maybe even Twitter eventually. Facebook, with its insane user base, will always be a hard target to beat, but you never know. In Pinterest’s favor I can only quote the saying, a picture is worth more than a thousand words. I guess only the future will tell just how successful Pinterest will really become.

Made by Modea
Using stats from comScore and a few other analyses, full service agency Modea has put a few interesting facts about Pinterest into visual form with this infographic.

By visual.ly
Some data compiled by Visual.ly sheds light on the interesting differences between U.S. and UK Pinterest users. Using anonymized, aggregated opt-in data from various Google products (including Toolbar and Analytics), DoubleClick Ad Planner has drawn some conclusions about pinners on both sides of the pond.

Pinterest: Everything You Wanted to Know About 2012′s Hottest Startup

Created by Lemon.ly
Lemon.ly, a visual marketing firm, took a deep dive into the data to catalog Pinterest’s stunning rise and produced the infographic below. What’s clear is that with 10 million users, Pinterest has already made its mark in terms of web design influence, if nothing else.

Designed by Column Five Media
Software company Intuit published a helpful infographic to help businesses figure out if Pinterest is right for them. If your business is contemplating joining Pinterest, follow the below guide to help decide whether it’s a smart decision.

By Monetate
Pinterest, a two-year-old social bookmarking site that lets users collect and share things they like on the web, is driving increasingly significant amounts of traffic to retailers’ websites. The amount of traffic Pinterest sent elsewhere has risen accordingly, becoming a top five referrer for several apparel retailers, according to internal data from Monetate, which provided the infographic below.

By Maxymiser
While shaping your brand’s image on Pinterest, remember to take into account the specifics of the site’s userbase. A recent study showed that home, arts and crafts, style/fashion and food are the most popular categories on Pinterest. The food category is the fastest growing segment of Pinterest.

By Internet Marketing INC.
Well it’s not too often a social media site experiences as much traffic and growth as Pinterest, especially amongst females. Even more so, Pinterest already accounts for more referral traffic on the web than Twitter, LinkedIn, and Google+. It is becoming coming clear that leveraging Pinterest along with a professional SEO company or social media marketing agency is an essential part of a successful internet marketing campaign.

By Statista
Statista have gathered a bit of data from comScore to illustrate just how engaged Pinterest users have become over time, and in comparison to other networks. In January 2012, users spent the same amount of time on Pinterest as they did on Tumblr — on average, 89 minutes per user. 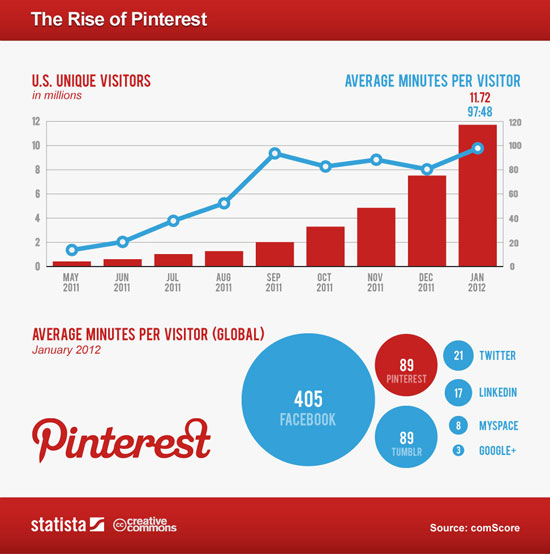 Created by Column Five
Column Five created this infographic to examine the Pinterest addiction that seems to be spreading like a zombie apocalypse virus. Proof? Pinterest users spend an average 98 minutes on site per month, third only to Tumblr (2.5 hours) and Facebook (7 hours). Antidote? None.

By OnlineSchools.com
In the below infographic, we dissect the hot new social network and answer the question: WTF is Pinterest?

By JMBlock
Infographic I designed with several different ways men can use the website Pinterest (www.Pinterest.com)
Of course, there are many more things that men can use Pinterest for, but this just details a few of them.

7 Comments
Leave A Reply
Popular Posts
We Recommend
Windows VPS by VPSServer.com
do my homework for me
Wallester.com White label card issuer