Who is not familiar with Twitter? Of course you do right? Even international companies take advantage of this Twitter media for their brand campaign. Campaign aims at Twitter than to increase Twitter followers also aims to increase the popularity and sales of their products.

Campaigns is a variety of strategies, there is a greater emphasis on promotion of products there is also an emphasis on donating the product to the needy.
Here, I will show you the case study of how 10 Big Brands do Campaign on Twitter, so you can put the lessons from it, below:

The Coca-cola company create a website with the title HappinesIsland.com and promote it on Twitter, it aims to tell their followers on Twitter about the new Coca-cola promotion projects that are unique and different from the others. From the example on the images below, we can see the Coca-cola ask their followers to take a tour of the new website happineisland.com, and let’s see what’s on the website of the sample happinesisland.com second image below.

What do you think? Campaign using unique website that invites costumers to make tour through the virtual world, interesting right?

Lesson: Creativity is the key in starting the branding process in social media, which have been made by Coca-cola is to create unique websites on the content of the Coca-cola company, not in a serious way but fun to invite the costumers to come into play with the world of Coca-cola. Try to make the unique creativity of your branding and share in your social network.

Mothers will like what Pampers did in their Twitter official account. Pampers invites mothers to share their happiness with a video posted on Twitter’s baby Diapers, for example as we can see in the picture below. Pampers share the video about a bunch of Diapers a baby who sings o canada and ask mothers to share the video in accordance with mother’s version of itself. Rather interesting campaign strategy adopted by the diaper, because their target audience is the baby, Diapers are not just about products but the campaign invites costumers to share pictures or videos belong to their respective babies. So if you are interested to participate in a video posted on Pampers?

Lesson: Campaign is not only about the products we offer, you can start by doing a campaign through the approach of the heart and feelings, if you know what is most preferred by costumers or target market you dig it and touch the hearts of your customers. As Diapers doing with their target market is baby one way to attract costumers they are the mothers who love their babies, the mother encourage the sharing of video belong to their respective babies so the mother will love Pampers also for providing the opportunity to share.

Duracell campaign is will invite us for better support the nationalists with the USA team in the match, the team participated in supporting the USA via hashtag #GivePower can invite the reactions of the followers Duracell to share the spirit and words of motivation in support of team USA. As we can see in the example of the second image of the hashtag #GivePower there are followers who share a video of the bike race in the Olympics. Dont’t miss it to motivate team with join Duracell USA.

Lesson: Each event contains a great passion for his supporters, don’t miss this opportunity to share with your followers on Twitter, make your official account to be a means to channel the spirit of your followers and get their attention to your Twitter account.

Who don’t know about Nokia product? Each year Nokia always release the new products that are usually more sophisticated than the previous Nokia series, as we all know the mobile technology can not imagine it would be, but there must be practice through video, which explains how to use and even a video can be used to compare the different of two products. It is utilized by Nokia Lumia in introducing its products, and the video distributes it to the Nokia official Twitter account. After seeing the Nokia lumia video, maybe you could consider buying it, doesn’t it? 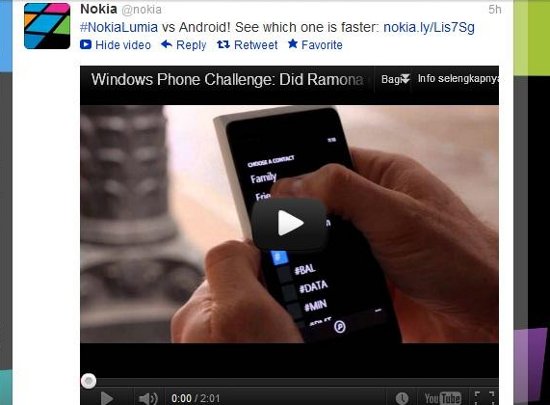 Lesson: Twitter media can be utilized to split the video you have, as did a video about the Nokia series Lumia vs. Android, because Android is now a real rival to all mobile products. From here we draw the conclusions that can show you have excess product by comparing it with other products. This campaign method will striking in the hearts of your customers.

Honda is vehicle brand for a ride.. Right! On Twitter Honda emphasizes that the game can be played by thir followers with hashtag #GoingGoingGoneGiveaway, this game offers a gift to his fans – the Family trip to the Little League Baseball World Series. With the genuine Honda Pilot accessories, Honda EU2000i Generator, Honda at the same time also donating $ 5,000 to a local little league with the most sweepstakes entrants. Make some interesting games right to your followers and promotes it with Twitter, its a smart campaign I think, honda Their will attract customers. 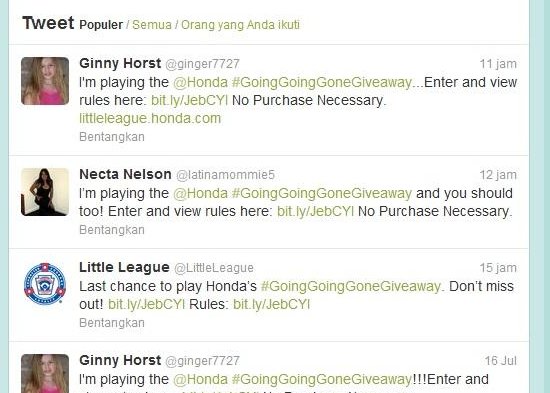 Lesson: What honda do is very interesting to make a game for their follower with hashtag (#GoingGoingGoneGiveaway). Twitter can promote this game so easily into their followers. Even more rewards and donating gifts to local little league. This can be applied as a strategy for your campaign, using the twitter hashtag and invite your follower to start enjoying the game that you have to offer.

Do you ever taste Cadbury? Delicious right? What about limited edition products? See Cadbury’s campaign as an example below if you would be interested in buying. Cadbury issued to their follower a special limited edition for different olympic campaign in favor of Duracell olympics by sending words of motivation through Cadbury official Twitter account. Of course the limited edition is only appear when the course of event and after that you couldn’t find it again. A campaign that could attract the curiosity of costumers right?

Lesson: Variety of ways you can employ to support an event through the brand you have, as is done by Cadbury. They support the olympics event by issuing a limited edition products. Of course it campaign will surely attract the curiosity of the costumers and Twitter can be used as a means of information to the followers of the presence of limited this product.

Lesson: By using the slogan “The more you order online, the more points you will earn rewards”. Then indirectly Papa John’s Pizza costumers will order the pizza online. From this we can learn the advantage of online media to encourage your customers to order products that you offer in exchange for points that can be exchanged for a product or discounts.

What do the Chili’s Grill & Bar is similar to Papa John’s Pizza. The difference is the Chili’s Grill & Bar invites followernya to use the hashtag #BagTheBagLunch, campaign “Bag the Bag Lunch” invites costumers to share the video campaign to their friends used social media network, the more friends we share this video, the more you will collect coupons free chips and salsa.

Lesson: That you can learn from this campaign is, by invite your friends followers you’ll get involved in our campaign is a surefire way to attract the attention of our followers.

This time Toyota make a social campaign with the theme of 100 cars for good, which Toyota followers have invited to vote several foundations that Toyota require to meet needs. This course will appeal the people to help each other in facing adversity social organization, the first day of a vote could help the organization get a car that could help them.

Lesson: Toyota has seen this campaign will help many people and also advantageous in terms of profit, with a campaign to help social organizations indirectly Toyota also makes a profit with free advertising. And Toyota’s brand also get a good image in the eyes of their follower.

Crocs Campaign this time is similar to what Toyota did. The difference is Crocs shares Crocs shoes free of charge in cooperation with UNICEF to several countries in need. From their website www.Crocscares.com, you can get the description of the program held Crocs and UNICEF in helping children in the middle country. 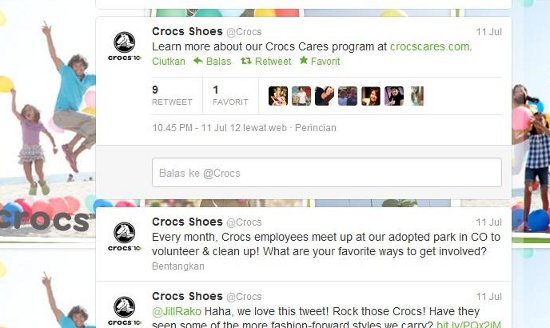 Lesson: Join some non profit organization to help the world as Crocs do. A humanitarian campaign by participate as a sponsor. This indirectly Crocs shoes will introducing not only in developed countries but also in middle country.

Freebie: Wallpaper Calendar of January 2013 (for Desktop and iPhone)