Do you ever rebranding your brand? Or you want to do the rebranding? Make decision rebranding is need considerations and calculations that quite mature. Because this is quite complicated job when a company decides to undertake a rebranding.

As I have expressed above, there is some benefits you can get if you do the rebranding, but not least the top brand that rebranding made ​​a mistake. Based on that, in this article I’ll discuss how the top brands doing rebranding mistake with the lessons that you can learn:

1. Avoid the different domain name from the previous

Overstock took the decision to rebrand domain name of its website in 2011. By replacing the name of a previously Overstock.com becomes O.co which make a huge problem. Patrick Byrne told in financial analysts yesterday that: “O.co was my bad call” and that “about eight out of 13 people who were trying to visit us through O.co, eight were typing O.com”.

The consumers who are unfamiliar with overstock certainly feel confused by these changes, especially at the turn of this domain name when Christmas time, imagine how much its harm overstock with small errors. Byrne said came as Overstock reported 2011 revenue down 3% to $1.05 billion and fourth-quarter revenue down 10% to $314 million! So awful.

Lesson learned: Give extra attention to named your domain, don’t much different from previous. Of this overstock case, should not choose O.co but O.com, it is because Overstock.com is a previous addresses, this is due to consumers who are already accustomed to looking overstock.com will be confusion if the address changed to O.co.

Each brand has its own identity that distinguishes one brand with another. Doing rebranding is sometimes required to change the image of a brand to be more up to date, but consumers are not going to like your brand if you lost original identityy,if that happen you will be meet rebranding disaster as experienced by Tropicana and Gap. Here is an explanation why them rebranding into disaster:

a. Tropicana
At first the public knew Tropicana logo image with a straw stuck into oranges, this image has the impression that the Tropicana orange juice is fresh drink and original of the fruit. Looks like this identity not recognized by the Tropicana. Until Tropicana rebranded it in 2009 that has change his packaging with images inserted straw in a glass, the difference before and after the packaging you can see in the example image below. 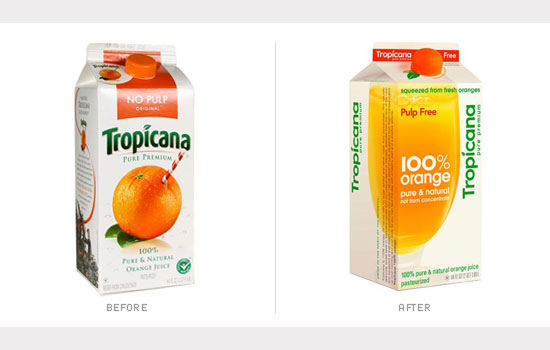 As you can imagine, the consumers do not like being in the presence of this rebranding, the new packaging makes the impression that the new Tropicana orange juice from the fruit is not original, it’s looks like ordinary syrup.

b. GAP
Rebranding disaster that occurred at this time GAP occurred in 2010; when GAP is over 20 years using the same logo suddenly change the logo that is almost similar to the ‘Microsoft Word Art-sequel.’ Comparative both before and after the logo you can see in the example image below

Consumers who see these changes give negative feedback in social media. Consumers who become fans on Facebook fans page belongs gap reveals that they are not going to buy clothes at the gap again when the new logo was not immediately replaced.

Gap executives, however, Appeared have doubts about their new logo just two days after its online debut. So it is not until a week had changed the logo again with the old logo.

Many times a product is already embedded in the minds of consumers for certain group’s customer, such as for children only, women only or for men only. Branding image is formed certainly becoming less profitable for brands who want to expand the target market.

It is also experienced by Dr. Pepper, that is a producer diet soda who not favored by men ranging from taste to the image that seemed to drink fizzy Dr. Pepper for women only. Of course rebranding advertisement Dr. Pepper required expanding its market share.

In 2011 Dr. Pepper decided to do the rebranding, and declaring that its new 10-calorie soft drink, Dr Pepper Ten, was “not for women,” the beverage maker angered a majority of its female customers. Of course women do not like the idea of ​​promotion of Dr. Pepper’s, so many negative comment dropped this idea. But Dr. Pepper does not give up easily and quickly make amends.

Do you know? Based on article from Ragan.com: The brand is marketing the new 10-calorie sodas to both men and women rather successfully. Being cited as one of the company’s biggest-ever national ad campaigns, the ads for the new drinks will target both sexes and play off the theme of learning to compromise via a shared love for the 10-calorie beverages. Rebranding disaster but with happy ending is so sweet right? 🙂

Lesson learned: Do not go too far with a group of people considers inappropriate for your product, make your rebranding can be enjoyed by everyone.

Rebranding often required by the brand to make the brand image is aesthetically relevant to the changing times. But mistakes can happen to everyone, but like what proverb say “experience is the best teacher”, therefore in this article I reveal the top brand that ever made a mistake in the rebranding they do, and of course a lot of lessons that you can you learn to avoid the same error during rebranding. Hope this article will help you to choose the right way when do rebranding.

What do you think? Have you ever done rebranding? What successes or tips that you can share? Please leave your questions and comments in the comment box below.

The Statute of A Logo Designer: Service Provider or Designer

Infographic: What’s Working, What’s Not, and What are Marketers Planning for 2014