How many social media accounts do you have? Is that twitter? Facebook? Google+ or LinkedIn? I bet almost everything you have, is that right? 🙂
There are several reasons why people are not satisfied with having just one social media account, which suggests there is usually because they just want to try a new social media or they are basically looking for perfection in meeting their needs in socializing with others.

#1: Connecting the same theme in the various social media

The first lesson we can learn from Starbucks is the linking campaign is he running on several social media that already been registered, while Starbucks campaign this time is #starbucksrefresher.

We can see in the example below, where the status of starbucks make #starbucksrefresher although on facebook does not have unlike hashtag twitter google plus and will remain, but dividing starbucks hashtag campaign on facebook, this is done starbucks to engage consumers at every social media to participate in his campaign. 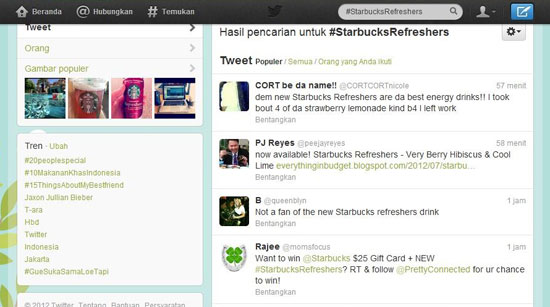 Do you have an event off air? Feel free to share them in social media you have, this is the second lesson that we can copy from starbucks in engaging with consumers. As we can see in the picture below starbucks share his pleasure in the global event month of service by dividing it in facebook.

Any consumer who saw the starbucks on the global status of this month will certainly be interested, and did not rule out the event was held again if they have a desire to follow him. 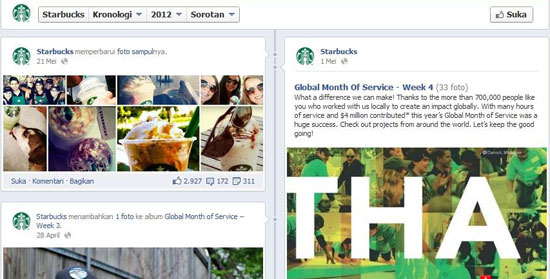 #3: Communicate with your customer

The main key in doing branding is to communicate with your customers. This is implemented by the starbucks in doing in social media campaign. In this third lesson we can learn from the campaign in social media starbucks is like asking how consumers feel.

As we can see in example picture google’s plus, starbucks asks that consumers feel about how your spending national ice cream day, this is one example that Starbucks wants consumers to know their opinions and feelings. As consumers starbucks were given the opportunity to share his personal opinion.

Show off your product in social media! This is an important lesson from promoting branding us on social media, as did the starbucks in the two social media, it has the google plus and twitter, where Starbucks offers to get more freepuccino and get $ 1 off each when we bring our friends to a gang visit starbucks . 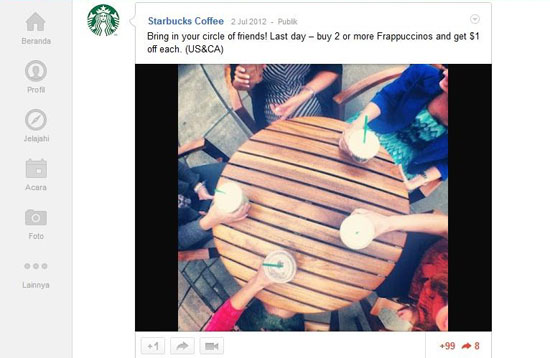 #5: Make some event with artists

Starbucks offers Feel free to watch the live stream below, starting at 5pm PST EST/2pm. If the customer want to join the conversation, they can share comments and questions for Adam and James on our Google + page. The customer can also follow the converstion on Twitter with the hashtag #hanginwithMaroon5.

In this way the benefits to be gained by Starbucks is increasing the number of their fans on social media, because starbucks provide opportunities for fans to interact with their idols. 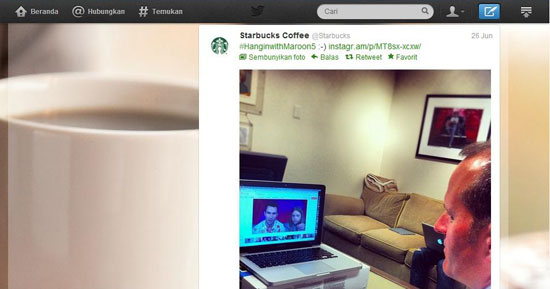 These 5 lesson from starbucks is the strategy to attract the attention of consumers and Overall Starbucks’s social media strategy integrates many different elements into the mix and combined together, these elements create a social media plan that works beautifully to create millions of fans for the brand and keep them involved in the brand’s doings. The brand has created a digital dialogue with its customers, enabling people to give their feedback and receive a response back from Starbucks addressing their concerns/comments. Starbucks is showing its customers and potential customers.

How can we take lesson from this Starbucks? Do you have any experience with the tips above? Please share with us in the comment below.

The 15 Most Completed Premium UI Design Kits in PSD