Case Study: How the Top Brands Use Twitter Hashtag in TV Ads on Their Business

Do you know what the relationship between TV and Twitter? As you already know everyone is so dependent on social media, every time they can update on social media. Even while watching TV, viewers will see two screens, the TV screen and the smartphone, especially during commercial breaks; TV audiences will increasingly focusing on the 2nd screen. That’s why, with the merger between TV ads and social media will generate higher engagement and greater return on total ad spend.

Did you know based on the infographic above – belongs to: Infographic: The rise of social calls to action in TV ads. A total of 50.781 audiences social calls to action while watching TV click on Twitter, this figure more than the audiences that Facebook is just a click as many as 37, 870. For this reason the top brand utilizing the facility Twitter hashtag to increase engagement with the fans, besides that fact it also can provide benefits that will be earned by the brand if combining Twitter and TV, here is that Fact from Twitter drives TV ratings, and brands with social media content can benefit article about engagement between Twitter hashtag and TV ads:

b. Twitter has recently partnered with Nielsen and acquired Bluefin Labs
As more Americans embrace second-screen viewing and make it part of their daily routines, new social media marketing opportunities open up. This highlights the value of paid and organic branded content for Twitter, and businesses that want to remain part of the wider online discussions must embrace evolutions in new media wherever they may occur.

c. With promotions on TV can grab the attention of online consumers
Adding a brand-appropriate comment about a hit show or popular TV event in a funny or witty Tweet can create a surge of new attention for any brand.

Based on the above facts, Twitter has change the way customer watch TV because its make the consumers react on seeing the ad on TV, its become an active and social endeavor. Sure not surprising that the top brands also utilize Twitter hashtag to appear in the ad, with a kinds of interesting themes they can successfully perform engagement. That’s why in this article I will reveal the excellent tips on how to use Twitter hastag in TV ads based on what has been done by the five following brands:

#1. Subway with the hashtag #subtember

Subway introduced its own hastag by name #SUBtember that promote the Subway $5 footlong. This is a promotion was launched in the United States in 2008 by offering footlong (30 cm) submarine sandwiches for US$5.(Source: Wikipedia)

Coinciding with the great recession, the promotion has been very successful for the chain, having spawned competitors to make similar moves to cut prices and attract customers. The promotion also helped start an ongoing trend of round price points on consumer goods.

The #SUBtember ad you can see on YouTube below, this ad will show you how subway introduces footlong with hashtag. You can also see in the picture below that hashtag #SUBtember is getting a very positive response from the fans, with a special promotion given in the September, make the fans feel lost after the September ends.

#2. McDonald’s with the hashtag #HappyMealBooks

McDonald’s promotion this time involving children, becuse they certainly McDonald’s main target market, this promotion for the exclusive price of £ 1, costumer will have opportunity to purchase 1 of 2 creative activity books. This promotion is simply by pop out the voucher on costumer child’s Happy Meal and present it at the till of any participating WHSmith stores (or Easons in Northern Ireland) and receive either The Doodlepedia Activity Book or The Doodlepedia Animal Antics Activity Book (RRP £ 3.99).

This promotion is reaping success with many incoming response to a hashtag #HappyMealBooks in TV and Twitter. This kinds of Ads is different from the others, because it promoted on Twitter and link the ads video that are published after this ad appeared on TV recently. As you can see below, when Mc. Donald’s promote this ad on Twitter and get positive feedback from customers who support the campaign Mc. Donald’s for kids. 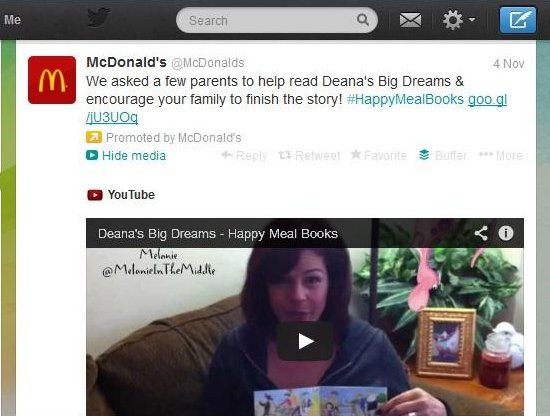 Lesson learned: Promote your Ad on Twitter with link your advertisement video, and do the campaign with specific targets market.

#3. Audi with the hashtag #progressls

For lovers of the car must have been seen the ad war between BMW and Audi, both brands are equally strong in their markets. Often times we find the ad that the two brands insinuated, but they also congratulating each other upon the award accept by brand competitors.

Audi ad that I took for this example is a super bowl ad with the title “Luxury has progressed”. The ads appear in the year 2011 with hashtag called, #progressls was a specific, pithy phrase that could, and did, yield a huge and varied volume of customer responses. The ads are also displayed at a time when all eyes are on the TV screen to see the match super bowl, so the commercials advertising the fans are very concerned with #progressls. As you can see in the YouTube video below the ad is pretty phenomenal, and see so many follower that respond in real time to the Audi hashtag.

Lesson learned: Take advantage to make provocative advertisements in the right time, so your ads will be views with maximum by consumer.

#4. M&M’S with the hashtag #betterwithmms

The Ad you can see in the YouTube video below titled “I will do anything for love”, this Ad as spoken by Mr. Roy Benin, show it is a fun and funny ads that the M&M chocolate is pretty delicious and can not to be missed. And the result is Hashtag #betterwithmms – get enthusiastic response from the follower who responded positively on Twitter.

Lesson learned: Between display ads and hashtag name have to interconnected. Make ads on TV are real examples to proof of name hashtag you created. Such as M&M’S with the hashtag #betterwithmms provide advertising display that shows how to have fun with M&M’S.

#5. Hyundai with the hashtag #pickyourteam

Results from its Super Bowl XLVII Co-Viewing Survey released by RadiumOne, revealing Hyundai received a record amount of social mentions around their super bowl campaign. Hyundai utilize this moment to show ads that hit enough for the viewers.

This ad with hashtag #pickyourteam as you can see on YouTube video below, that by carrying name hashtag #pickyourteam, Hyundai showed the competition in play among children. The theme is carried in the advertisement super bowl that has in common with a great team takes to win in the playoffs.

Lesson learned: Take advantage of the event super bowl by presenting an ad and make the hashtag name is similar to the event.

At this time watching TV not just sit passively on the couch, with the development of social media that is supported by a fairly sophisticated smartphone makes people more active to interact on TV and social media at the same time. Surely as a marketer you should have started to use social media for advertising on TV. Hashtag is one way you can make use of it, as I have expressed above, based from branding lesson from top brands that have been successful using the hashtag for the TV ads and has received a response in real time from the follower. Basically the use of time, theme and great name hashtag is a key to achieving success utilize hashtag on TV ads. I expected with this article you can find the right way to achieve success like the top brand did in using hashtag to advertising on TV.

What do you think? What are your thoughts on growing the TV ads with Twitter hashtag? Don’t hesitate to give your opinion in the comment below.