Case Study: How Starbucks use Green Marketing Campaign to Grow their Brand

Many kinds strategies adopted by Starbucks that I think quite unique and very beneficial to the preservation of the environment, not only interesting in terms of the product but also in terms of action to prove its seriousness in conducting the campaign, and here they are 5 Starbucks strategies that could be an inspiration for you:

#1. Do modification in products

The first thing done by Starbucks is doing modification in the product, taking into account a lot of cap waste that he will produce when the consumer has come out of his shop. Starbucks start to think to create a packaging that can be recycled easily.

As said by Starbucks: “It’s our commitment to purchase only the highest quality, ethically sourced and responsibly grown coffee. To reduce our own environmental footprint and fight climate change. And to give back to the neighborhoods and communities we’re a part of”.

This you can see in the picture below, you can see the start of a change in a Starbucks-owned packaging paper cup which started from 1971 to 2009 where packaging is Starbucks give to consumers is always an improvement to be more eco friendly.

#2. Get opportunity in the earth day

Earth day is an important day as a tangible manifestation of environmental conservation; Starbucks certainly not miss to participate in activities that are routinely performed in commemoration of earth day.

Each year a different theme Starbucks to commemorate the day, I took 3 years back theme as a tangible earth day green marketing campaign belong to Starbucks, and here they are difference theme earth day every year by Starbucks.

On April 22 Starbucks inviting everyone to bring in a reusable mug or tumbler and get a free brewed coffee or tea. The customer choice of brew, hot or iced This is happening at participating stores in the United States and Canada.

Starbucks recognize the impact one can make through careful, conscious choices. So he want to encourage and reward those of customer who use tumblers or travel mugs in their daily routines.

The customer will helping to reduce our environmental impact!. This campaign mean anytime customer bring in their own tumblr or travel mug to a participating Starbucks, they will get 10 cents off drink every day.

Starbucks Earth Day promotional campaign includes its green project, The Big Picture, where thousands of New Yorkers trade in their paper cups for reusable mugs.  Each coffee cup placed on the sidewalk leads to the formation of a design.  In the end, the large cup display forms an aerial mural of a sequoia tree.

To launch the campaign, Starbucks provided free coffee to customers who brought in their own reusable mugs.

The campaign’s catch phrase “One person switching can save trees. Together we can save forests” shows how individual actions can lead to collaborative efforts to help the environment. [Source!]

“Bring 10 used paper cups to get a coffee tumbler”. This is the slogan for an environment protection campaign Starbucks Coffee Korea will host to mark Earth Day, which falls on April 22.

The company has stockpiled 1,000 tumblers for the event that will kick off at 11:30 a.m. at Seoul Plaza. During the event, it will also distribute 3,000 flower pots and compost made from coffee grounds.

Facebook is a social media that are complete enough to provide the necessary facilities to its users, it is not surprising that Starbucks chose to do green marketing campaign in Facebook, Starbucks actually not only choose Facebook account but there is also use a Twitter, Google Plus and Instagram. But most the activities can display that have been carried out by Starbucks is Facebook.

Can we see the example image below that I took from Facebook belongs to Starbucks, there you can see some campaign events with the green theme has been done by Starbucks starting from the year 2010 until now Starbucks never ceases to perform the update through his official account on Facebook, it is not surprising that many consumers are getting information about the event to be held by the Starbucks via this medium so that each event is carried with the green theme of this campaign can be fairly successful. 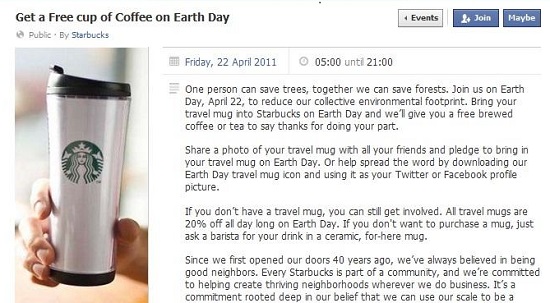 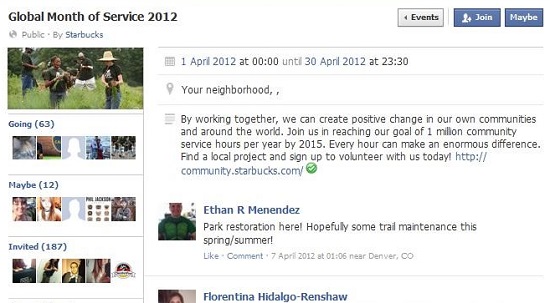 Green marketing campaign is a new way of doing marketing; of course it is not easy to do this kind of campaign, need totality and continuities to do that, so you will be taken seriously by your customers.

With totality businesses you can save the earth through your products and could even propitiate for consumers who want to save the earth. Eco-friendly campaign can give you more profit-fold as in my previous article that discussed the benefits of doing green marketing campaign.

As has been done by Starbucks can give you an example of the seriousness of doing green marketing campaign will give you get many benefit of it.

What do you think? Whether there campaign from Starbucks that you can apply to your brand? Please share your comment below.