A Must-Have for Every Great Site: jQuery Slider Shock

The web has changed, and the way to surf it has changed too; now people wants to have a nice and responsive navigation everywhere, taking advantage of the mobile trend. Those needs have caused the development of new gadgets and plugins, ready to be used in any device, either a regular PC or a top-notch mobile phone and users have been going through long searches to find cool, usable and responsive widgets.

As sliders have become really popular nowadays, Shock Family has developed a superior one; the great jQuery Slider Shock, considered the most complete slider for jQuery and WordPress. What would make Slider Shock better than others? Well, letâ€™s take a look. This slider is really customizable, whether you would like it responsive or fixed, includes more than 30 nice effects and a similar number of amazing skins to customize as you feel like. You can also change the appearance of design elements such as titles, texts, fonts, images, colors, patterns and backgrounds, so, you will have a lot of results by matching them as you want. 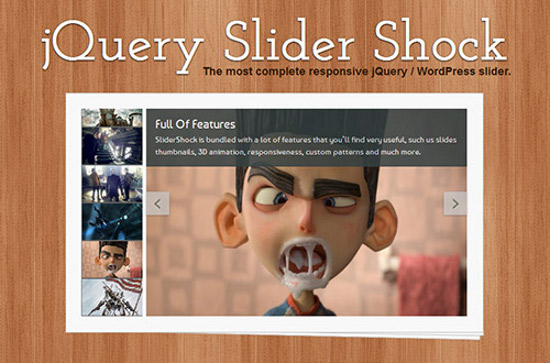 Sliders are no longer exclusive for images, there is a need to play some other content on them, and thatâ€™s why Slider Shock allows content from many sources, e.g. Youtube, Twitter, Flickr, Vimeo, Instagram, RSS, among many others; besides this, you can place thumbnails at any position of the frame, if youâ€™d like to do so. The WordPress version will also include several content: custom slides, custom post types, custom taxonomies and featured posts. If this wasnâ€™t enough (okay, it isnâ€™t), this beautiful plugin can be placed wherever in a single page, not only one instance, but as many as wanted, which is simply when there are several and different things to show on the slider.

Several licenses have been launched; you will find the free jQuery and WordPress Slider releases , for personal use, with some of the features mentioned above, or the premium version, in which you can chose either jQuery or WordPress, or a bundle with both; the price may vary whether you choose a single site, multisite or developer license.

You can take a look to some of these features applied to a demo posted on their website, where using a nice control panel you will be able to apply the different variations offered with this stunning slider, released by the team behind the great WP Theme Generator tool.